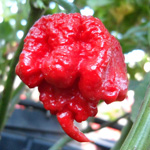 Carolina Reaper The hottest chilli is Smokin Ed's 'Carolina Reaper', grown by The PuckerButt Pepper Company (USA), which rates at an average of 1,569,300 Scoville Heat Units (SHU), according to tests conducted by Winthrop University in South Carolina, USA, throughout 2012. Guiness World Record Quote "We are delighted to confirm that you have successfully achieved a new GUINNESS WORLD RECORDS title for ’Hottest chilli’. We would like to congratulate you on your record-breaking achievement. With a Guinness-submitted 1,569,383 SHU (scoville heat units) average and recently measured peak levels of over 2,200,000 SHU, SMOKIN’ ED’S CAROLINA REAPER® has officially completed its long journey to the top of “super-hot” chilli charts." 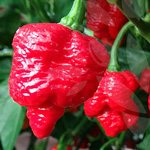 Moruga Scorpion The test results from New Mexico State Univsitye provided 3 results, a High, Mean and Low Scoville Units, which would seem to be a more stable overall result. Data showed that two individual plants for the Moruga Scorpion exceeded the 2 million Scoville, and the first chilli to do so.Overall tests show an astonishing 1,359,000 on the Scoville scale 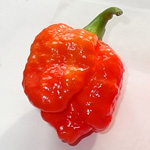 Trinidad Scorpion "Butch T" is a chilli pepper that has been measured as the world's hottest. The pepper is a particular strain of the Trinidad Scorpion, which originated in Trinidad and Tobago. It is named after Butch Taylor who is responsible for propagating the pepper's seeds. The "Scorpion" peppers are referred to as such because the pointed end of the pepper is said to resemble a scorpion's stinger. The first few pods to be tested, and while they knew they were hot, they were astonished at the results with the interim results showing a whopping 2,009,231 SHU’s. 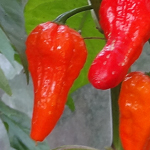 The world’s hottest chilli does not hail from India, Thailand or Mexico but now from a small greenhouse in Cumbria. It was created by crossing three of the hottest varieties of chilli pods known to man. The Naga Viper rates an astonishing 1,359,000 on the Scoville scale. The result is a record breaking chilli that will make your eyes stream, throat burn, nose run and much, much worse. Experts at Warwick University carried out tests on the chilli and officially declared it the hottest. Creator, Gerald Fowler, a full-time chilli farmer for five years, said: ‘When they grow chilli in India or the Caribbean they’re used to the heat and the drought. When they’re grown over here I think they fight back against the harsher climate and produce even more heat. 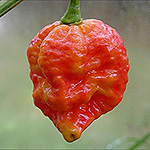 The Infinity chilli is hotter than the Bhut Jolokia chilli, the former record holder, which is used by the Indian military to make hand grenades to immobilise terrorist suspects. Tests by Warwick University rate the Infinity chilli at 1,067,286 on the Scoville Scale which is used to measure the heat of peppers. The Bhut Jolokia chilli is measured at 1,041,427. A jalapeño measures just 2,500 to 5,000. Weapons-grade pepper spray is 2,000,000. This variety is named Infinity for its "never-ending" burn, which cannot be quelled by even the best antidote, milk. Update September 2010: The ChilliPepperPete Naga piped the Infinity with 1,086,844 SHU, but now the Infinity is back with new results for the 2010 crop, it has a whopping 1,176,182 SHU, that is almost 100,000 hotter that anything else tested before. 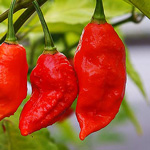 The Naga Jolokia also known variously by other names in its native region, sometimes Bhut jolokia, is a chili pepper recognized as the hottest in the world. The pepper is occasionally called the ghost chilli in the U.S. The Naga Jolokia is an interspecific hybrid from the Assam region of northeastern India and parts of neighbouring Bangladesh. It grows in the Indian states of Assam, Nagaland and Manipur, and the Sylhet region of Bangladesh. It can also be found in rural Sri Lanka where it is known as Nai Mirris (Cobra Chilli). There was initially some confusion and disagreement about whether the Naga was a Capsicum frutescens or a Capsicum chinense pepper, but DNA tests showed it to be an interspecies hybrid, mostly C. chinense with some C. frutescens genes. In 2007, Guinness World Records certified the Naga Jolokia as the world's hottest chili pepper, 401.5 times hotter than Tabasco sauce. 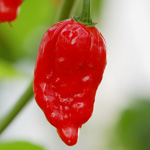 The world’s hottest chilli pepper does not come from a tropical hot spot where the local’s are impervious to it’s fiery heat but a smallholding in deepest Dorset, Uk. Some chilli’s are fierce enough to make your eyes water. Anyone foolhardy enough to eat a whole Dorset Naga would almost certainly require hospital treatment. The pepper, almost twice as hot as the previous record holder, was grown by Joy and Michael Michaud in a polytunnel at their market garden. The couple run a business called Peppers by Post and spent four years developing the Dorset Naga. They knew the2 cm-long specimens were hot because they had to wear gloves and remove the seeds outdoors when preparing them for drying, but had no idea they had grown a record breaker. Some customers complained the peppers were so fiery that even half a small one would make a curry too hot to eat. Others loved them and last year the Michauds sold a quarter of a million of them. At the end of the season they sent a sample to a Lab in America out of curiosity. They were stunned when the Dorset Naga gave a reading of nearly 900,000SHU. A fresh sample was then sent to a lab in New York used by the American Spice Trade Association and they recorded a record mouth numbing 923,000SHU’s. Mrs Michaud said ‘The man in the first lab was so excited he’d never had one half as hot as that. The second lab took a long time because they were checking it carefully as it was so outrageously high. The Dorset Naga was grown from a plant that originated in Bangladesh. The Michauds bought their original plant in an oriental store in Bournemouth, UK ‘we were’t even selecting the peppers for hotness but for shape and flavour when the test results came back we were gob smacked’ The couple are now seeking Plant Variety Protection DEFRA which will mean that no one else can sell the seeds. Anyone wanting to try the chillis will have to be patient as they are harvested only from July on. In Bangladesh the chillis grow in temperatures of well over 100F (38C) but in Dorset they thrive in poly tunnels. Aktar Miha from the Indus Bangladesh restaurant in Bournemouth said that even in it’s home country it is treated with respect. ‘It is used in some cooking mainly in Fish curry’s but most people don’t cook with it . They hold it by the stalk and just touch their food with it ‘ he said. It has a refreshing smell and a very good taste but you don’t want to much of it. It is a killer chilli and you have to be careful and wash your hands and the cutting board. If you don’t know what you are doing it could blow your head off. 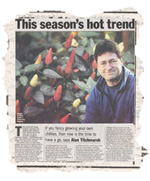 The Hottest thing around, at last people are beginning to wake up to the fact how easy chillis are to grow, not only that but they are also fun and easy plants to care for as this article points out. Its about time the chilli gets recognized in the UK and a better name for itself, the Americans have been eating and enjoying all types of varieties for years. You can start picking green chillis as soon as they're big enough although if you let them ripen you will get their full fiery flavour. To lessen the heat remove the seeds and pith, one tip mentioned is to put surplus chilli seeds in with peanuts you put out for the birds as this should stop squirrels pinching them, the birds don't notice, but squirrels aren't into chillis just yet. There is also loads of other chilli dishes available apart from just chilli con carne using all the different varieties for different flavours and strengths from pickling to eating raw or stuffed or stewed to even chilli ice cream, which is highly spoken of by enthusiasts, it must be interesting to try.

The hottest chilli on Earth is Indian, claim four scientists. They say that the pepper called Naga Jolokia from the north-eastern area of Assam where it is grown has beaten the Mexican Red Savina Habanero, widely-acclaimed as the hottest. The scientists from the Tezpur laboratory reported 855,000 Scoville units of pure capsaicin (the scale of heat in chillis). The scale is named after German scientist Wilbur Scoville, who first measured heat in chillis see details below). Although the chilli is thought to be a relative of the habanero these tests are thought to be faulty.