Here we go again new selection for this year, we are trying to grow a hot selection this year which may prove tricky if weather is as poor as usual. We will sell any spare plants we have plus the ornamental selection from below in about May time from our market stall so don't miss out this year.

B&Q Heated Propagator, 8 Watts heated seed propagator. Electric heated propagator is made from rigid plastic base tray with tough shatter resistant clear lid. Electric seed propagator has ventilation which is adjustable. Temperature about 15 - 20 degrees C. Not much control as it just plugged in but done the job.

Feb 26: Planted first 60 seeds (Trays: 10 x 6 cells : 3 x 6 cm deep) in small heated propagator in our lounge. They will probably grow a bit spindly heading towards the window but will try to counteract with a silver reflector behind to reflect and increase light.

April 14: Very poor start this year weather has been bad, low light and very cold days odd snow showers and frosts right up to mid April. A few days have been warming the greenhouse and have put the first few plants outside from our lounge to get a full day of sunshine. The Naga's, Madras and the Red Mushroom have not germinated even though the Red Mushroom was a bought seed this year, further sowings have been made. Most of the Habanero's are up to 4-6 true leaves and have been re-potted into 6 cm square pots.

May 1: Weather still more like winter, the plants (above) are the first sowing from Feb which are now starting to make a bit of headway. (Left) we decided to sow some in very small plugs, 10 mm square at top probably 20mm deep two weeks ago and as you can see we had nearly 100% germination in these and very easy to transplant as they pooped out with a simple push from the base, plus the space saving advantage, 48 plants to a tray. All plants now potted on and in cold greenhouse. Might sow a few more today and see if they catch up.

June 18 : Weather now much better with temperatures in the greenhouse over 120°. Regular daily watering now required. Pots and ground plants all doing well, Padron is about 60cm high and starting to flower, while the Nepali Orange looks like it will be a compact little bush but has plenty of flowers on. The Naga plant is in a pot and currently doing well being about 30cm high.

June 29 : All plants now doing well in the sunshine. Padron is about 100cm high with a few fruits developing, biggest 5cm long. The Nepali Orange also has a load of small upright fruits developing. Just beginning now to give the fruiting plants a little weak tomato food.

July 11 : DISASTER STRIKES While we were away on holiday for a week, a watering can got used which we only have for weedkilling, in the space of 2 days we have lost most of our pot planted croppers. Luckily the Naga and Red Savina got missed. Have lost all the ground planted plants Padrons, Fish, some Chocolate Habanero, Scutaba, Nepali Orange and some Super Chillis which we always grow for a good crop. Just off to hang myself in the greenhouse

All plants now sorted out, dead ones gone and all the pot ones now can be spaced out better, have enough survivors to carry on with only the Fish missing, will try that again next year. Good news, Naga coming into flower as is the Red Savina, have found a Scutaba, Chocolate Habanero and Nepali Orange in pots, these are not as quite as advanced as the ground ones but most plants now have buds or flowers on. The Padron is ready for picking.

Weak tomato feed has now be given to the fruiting plants, and a quick top dressing to all the ones with roots showing as the soil has dropped a bit. Lets see how it goes with just the pot plants.

July 30 : Continuous hot weather is making this a good year for the Habanero types with most of them now in fruit, just waiting for the Chocolate Habanero and the Naga Jolokia. Have also received a Naga Morich to keep it company thanks to Tony on the forum board for sending it through, just a little bit behind but will soon catch up if weather continues. Padron's still being cropped with some even ripening to red if left.

Aug 30 : We were doing so well with the long hot days, even the habanero's looked like they were all going to ripen. The Orange Habanero and the Scutaba now starting to ripen, but the Chocolate Habanero is growing large but no signs of changing colour, neither is the Red Savina, but quite a few fruit on. 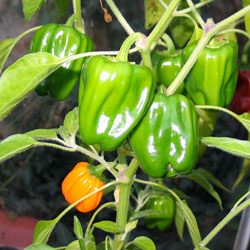 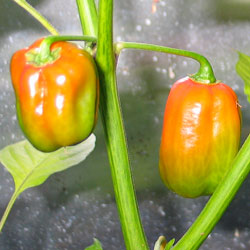 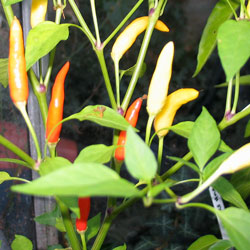 Sept 2 : Padrons have nearly all been picked now, but didn't find a hot one amongst them, but still were good either pan fried or raw in salads. The Naga Morich is fruiting well with long 6-7cm fruits, but getting bit late for the Naga Jolokia as its only just flowering. 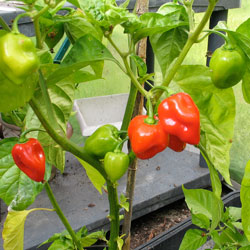 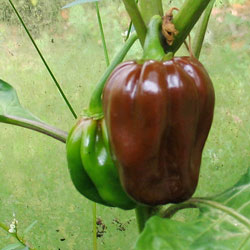 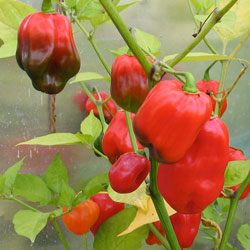 Sept 14 : Weather isn’t too bad as there is still warmth on good days with a good day of sunshine, but evenings and mornings getting damp. All the Habanero types now have ripe fruit on, including the late Chocolate type, even the Red Savina, will have to start picking some now for tasting. Scutaba is a very prolific habanero type although the fruits are slightly smaller than the others. Naga Morich is just coming in to fruit so may have to take him indoors now to get some fruit for seeds. 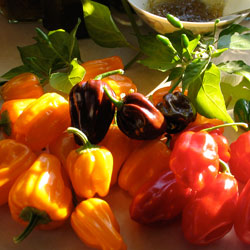 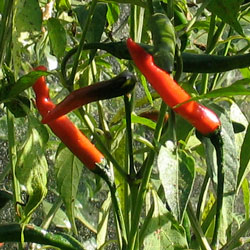 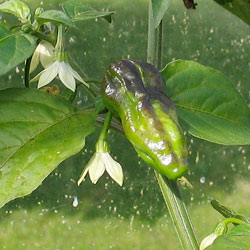 Sept 20 : Plants starting to loose their healthy looking green shade now as it approaches Autumn, cold damp mornings and evenings, with pests about, white fly is appearing again, time to get rid of it and the plant. Extra plant (left) Birds Eye type brought back from Papa New Guinea, and far left the long cayenne type was also brought back, but true name of these are not known.

Oct 8 : Just been down to greenhouse and decided time for a clear up this year, last few chillis picked, with a good crop of Red Savina's, which have only been grown in pots. Have left the Naga Jolokia and the Naga Morich to ripen a few more pods. I will try and overwinter the Naga Morich as its a lot more sturdier than the Jolokia and may try the Red Savina, rest can all go in the compost and time to clean out the greenhouse.