This year we are growing a selection of some new superhots Moruga Scorpion Yellow, Naga Morich King, Naga Viper and the Trindidad Scorpion Butch T, all are now competing for the hottest in the world again.

Growth Technology Chilli Focus Chillis and peppers have specific nutritional requirements. While it is true that they can perform reasonably well with general purpose “feeds”, the best results will be achieved by using a formulation designed specifically for them. Chilli Focus is precisely formulated for the needs of chillies and peppers – it does not contain urea. It supports the production of healthier, more vigorous plants and colourful, juicier fruits.
Growth Technology Root Riot Cubes Made from composted organic materials, these cubes have a great spongy texture which retains the perfect air/water ratio for healthy, rapid root growth. Suitable for both cuttings and seeds, Root Riot® consistently outperforms alternative media. The cubes are specially inoculated with micro nutrients and biologically active ingredients to nourish young plants, and to aid root development. Greenhouse Sensation Vitopod Precise control propagator- the accurate electric digital thermostat can be set to any 1°C between 5°C and 30°C and the display shows the actual and the set temperatures. The lower temperatures are ideal for over-wintering cuttings and prized plants, the higher temperatures are great for getting hot chillis and exotic plant seeds off to a flying start. Large vents in lids and sides – for superior humidity control, so your plants don’t suffer from damping-off. Even Heat - delivers an even heat throughout the base, so there are no hot spots or cold spots and your seeds and cuttings will germinate evenly. Height adjustable – add the extra layers to give plants more space. Perfect for when the weather is taking its time to warm up enough for you to plant-out and for protecting taller mature plants from the cold. Robust - the Vitopod is built to last. The lids and sides are made from a robust acrylic and are treated to protect them against the UV deterioration which makes other propagators turn yellow and brittle.
Greenhouse Sensation NFT Hydro System GS200 5 plant, it constantly pumps a stream of water and nutrients to the plant roots and provides unrestricted access to oxygen. The nutrients for the NFT include all the elements plants need for healthy growth. The planter reservoir is completely emptied and refilled every 3 or 4 weeks, so no elements are ever too depleted or too concentrated. (Now called the Vivigrow 5 Plant Kit).

Feb 5: Was contemplating starting them off today, but after 4-5 inches of snow overnight I think it can wait. The Vitopod needs a clean and disinfect, but far to cold to go and get it and clean up.

Feb 19: Seeds have been sown into plugs and set in the Vito Pod to germinate. Temp set at 25C but won't be able to hold that at night at the moment. Few extras are Padrons, Serrano's, Lemon Drop, Medusa, Aurora and Habanero Trinity.

Feb 25: Signs of life today for all the varieties, King Naga and Naga Viper first to show. Even though we had a frost again this morning and a very cold conservatory the Vito Pod keeps them warm dropping to about 18C at the lowest.

March 17: All this years new seed varieties had germinated in 5-7 days and now on first true leaves, while some of our year or 2 year old packets and saved seeds have taken up to today which is just about 4 weeks.

March 18: Horrible wet day outside so in the greenhouse potting on most of the plugs into 3 inch pots. As there is no root disturbance with these foam like plugs the plants do not wilt when transposed. A bit of loose soil can be washed off the leaves as they are given a slight watering and back in propagator as nights are now frosty again. Greenhouse Sensations have these 3 inch rockwool caps this year and should keep the tops of the rockwool from getting too grotty, keeping pests and diseases at bay, and moisture in.

April 19: Can't wait any longer, NFT filled up, pump cleaned and descaled after a stuttering start. Amazing little pump still going after many years and takes only 6W. Rest of plants now greenhouse bound, dreaded whitefly on soil of a couple but they look dead (the whitefly), too cold for them as well.

April 29: Been cold and wet now for 2 weeks and there's hardly any progress on plants, even the small amount of whitefly has died and fallen to the soil from the leaves. Hydro NFT is looking even worse as there's been no progress on these small plants, should have left them in soil and washed off for NFT when much bigger.

May 06: Still no let up of the cold wet weather so have decided to add a bit of light at the end of the day with these 20w LED strip lights from GreenLightsLED and have put them on a timer. Was going to pot on all the plants today but have decided to leave another week as forecast is more rain for 4 days and a frost tomorrow morning.

June 1: Plants all potted on into a mixture of good compost and perlite. The quadgrows all contain the hot Naga strains as does the NFT 5 planter. Other favourites include Lemon Drop, Serrano, Fatalli, Anaheim and Padron. Not much watering to do at the moment as the weather is so cold.

July 19: Plenty of grey sky and rain for almost a month now which isn't helping growing. Whitefly and greenfly now a massive problem even with constant soapy sprays, will end up doing a aphid wipeout with Provado soon. GreenHouseSensations quadgrows are doing well for foliage growth as the NFT was slowed by persistent aphid attack on the Nagas. Time to put a few strings in to hold the plants up now as they are getting to the lean over stage.

First of the croppers are the Padrons and the Serrano's which are growing in pots, so have started taking the Padrons before they get too big for a quick tapas snack.

July 26: We've just had a week of sun now and all the plants have come to life, all the Naga strains are flowering and have small fruits starting to develop. The Quadgrows are now consuming at least 10 litres of nutrients a week and NFT just had a complete bath change.

Aug 2: Weather back to grey and rain, time for a greenhouse tidy.

Aug 11: Just picked a load of Padrons, Anaheims and Serranos which are best picked green. I think a few Serrano's will go in a home made guacamole, while the Anaheim's can be grilled and stuffed. Among the hotter types the Trinidad Moruga Scorpion Yellow is doing the best for size with plenty on the bushes. Lemon Drops are doing their usual and starting to flop all over the place so plenty of tying up on these to be done. Watering is daily now and filling up nutrient tanks every few days with the warmer weather and thirsty big plants. 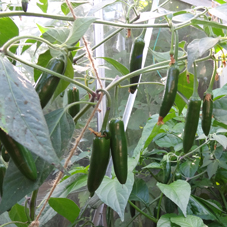 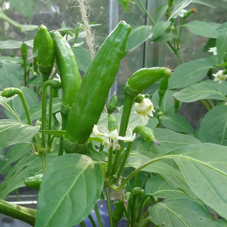 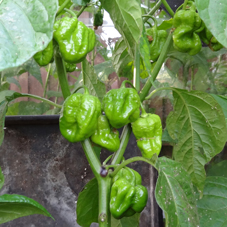 Sept 10: Slow month a few sunny days but generally gloomy as there is plenty of foilage growing like mad but slow fruiting. First to ripen are the Moruga Yellows and the Lemon Drops. Soon to time to start de leafing a bit to get more air and light through the plants. 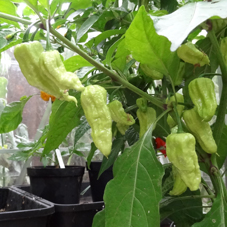 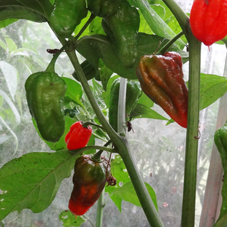 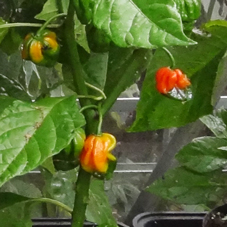 Oct 10: This has to be one of the slowest years of growing for us. The only ones that have done really well are the Vitpod plants which have a constant source of water and nutrients below their soil pots. The NFT has suffered from poor starting roots and then aphid attack so has not really recovered. Pots plants have done well. and are now harvesting from all plants now. One last time top up and deleafing to help with light levels, better circulation and trying to keep damp and mould at bay for as long as possible.

Greenhouse is now a bit choked full of large plants, we have de leafed many of the large plants as can be seen to get maximum light and air through to prevent damp and mildew setting in to early, the tops have also been cut as the flowers now are too let to benefit from and taking energy from the plant. 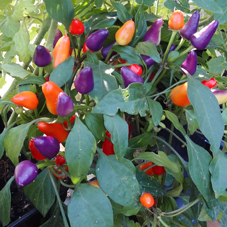 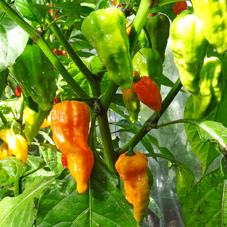 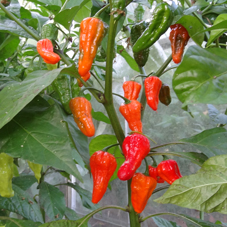 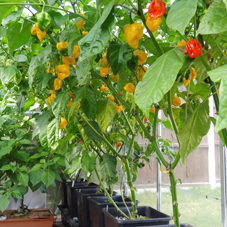 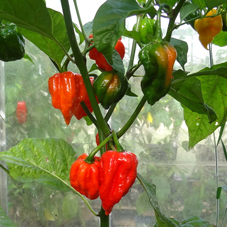 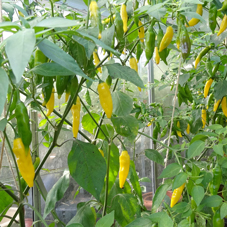 Plenty of ripening chillis to pick, all of these will eventually be used in our range of hot sauces throughout the year.