Here we go again new selection for the year, we are trying to grow a mixed bag again from the small Thai to the larger Anaheims and waxes to sell fresh chillis at the market later in the year. We will sell any spare plants we have plus the ornamental selection from below in about may time from our market stall so don't miss out this year. Some of our customers have successfully overwintered a variety of the ornamental plants.

B&Q Heated Propagator, 8 Watts heated seed propagator. Electric heated propagator is made from rigid plastic base tray with tough shatter resistant clear lid. Electric seed propagator has ventilation which is adjustable. Temperature about 15 - 20 degrees C. Not much control as it just plugged in but done the job.

March 1: Awaiting for some decent weather and to get the electric down to the greenhouse again to plug in the propagators
March 12: Planted about 180 seeds (Trays: 10x6 cells : 3x6 cm deep) in small heated propagators in an unheated greenhouse, taking a risk this year but at least they will get good all around light all day instead of directional on a windowsill, if they germinate!
March 27: Two weeks later, good germination rates off most, the only one not showing as yet is the Nu Mex Twilight. Started another 120 off for the Markets.


March 31: Nu Mex Twilight now germinating, so even with the colder nights we have had a really good germination this year just from bottom heated propagators in a cold greenhouse, now with good light for them I'm hoping for some thicker stronger plants, and not leggy ones trying to grow toward the window light.

April 24: Plants all transplanted into 6cm square pots and most have true leaves on, weather still not too good as there were 2 frosts this week, although daytime temperatures are rising on sunny days, have to be careful not to lose any by drying out in the sun, before they freeze again at night.

May10 : Although on good days now the temperature is rising to 100F in the greenhouse these days are still a scarcity. Watering once a day to keep constantly damp. Some will now be sold in the next few weeks, while others will find their permanent position either a 20-30cm pot or straight into the ground in the greenhouse.

May 29 : All plants are now in the ground in the greenhouse about 15cm high, while some of the small varieties are to be kept in about 20cm pots, The over wintered Karneval Yellow, has a few ripening chillis on and is now in the greenhouse, probably could now do with a fresh top dressing.

June 15 : Karneval Yellow has now a good crop of ripening chillis, been trimmed up a bit top dressed and a tomato food watering, this over wintered plant is about 3 months ahead of a new grown seedlings, so is well worth trying to keep a few plants going over winter.

June 25 : Most of the plants now have small flower buds appearing. The Super Chilli which we grow each year for its huge crop for the freezer has a few small chillis developing.

June 30 : Left, is the Rocoto Yellow from the capsicum pubescens species which is native to Bolivia and Peru. They are identified by their black seeds and hairy leaves (the name component pubescens means hairy).

June 30 : Left, the only Naga which came up from 10 seeds is a bit behind for a chinense to get a ripe crop from, perhaps I will try and keep over winter for an early start.

Right, the Santa Fe Grande had the dreaded leaf curl 2 weeks ago with a few aphids around the tip, so I just nipped the whole top off and it's now recovered into a healthy little bush.

July 15 : After battling past the black and red ants I can get to the first of the crops to develop, the Super Chilli, Hot Banana and the Santa Fe Grande. Most of the others have a healthy amount of flowers on. The Yellow Rocoto will now need stringing up as it shooting upwards at an alarming rate. Time for a good weed, disturb the ants again, and a slight feed for some.

July 22 : Still a mixture of extremely hot weather to really cold again. The Anaheims are appearing (Left) as are the Thai style ones in the pots. A few flowers are showing now on the Yellow Rocoto and the Hot Paper Lantern. White fly has attacked 2 pots plants severely, but seem to have left all the others alone, I will try and treat them separately out of the greenhouse, if not they will have to have a funeral.

July 24 : The Naga is doing well in a pot at the moment but still has to flower, but is looking healthy with really big leaves. Small chillis on the Aurora and Serrano Del Sol. The Super Chilli is now bushing up with plenty of upright fruits on. Red and black ants are now getting a pain in the greenhouse may have to declare war if they get any worse.

July 30 : The Naga has flowered so we will wait and see. The Rocoto Yellow is still growing upwards like mad with an odd flower on, and will fall over unless staked up, a lot of stalk with not much else. Small chillis now appearing on the Hot Paper Lantern, all the Thai style ones are covered in flowers and small fruits. Super Chilli now beginning to be full of chillis and time to try an Anaheim I think. Lemon Drop is in a pot, and now beginning to flower.

Aug 1 : The Nu Mex Twilight has a few fruits on and is getting a bit tall for a pot. All have had a weak feed of tomato plant feed as they are all in fruit. The pots are needing a watering each day although weather is still not too good and the plants in the ground could get away with every other day watering at the moment as we don't seem to be getting a summer this year. 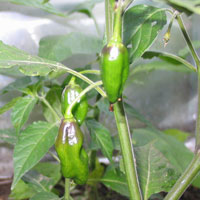 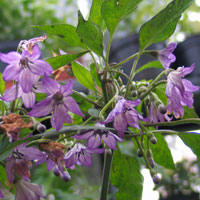 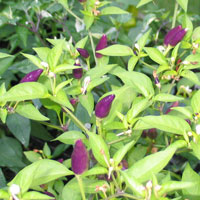 Aug 15 : Now starting to pick a few Anaheims, Santa Fe Grande's and Hot Banana's to relieve the plant of some weight. Hot Paper Lantern and the Naga has small fruit on. Rocoto Yellow is the only one without fruit, has a good few purple flowers on a tall and sprawling plant.

Sept 1 : The earlier chillis are now ripening well, although this has been the poorest year for summer weather we have had in all our 6 years of diaries. The super chilli has done well and is ripening but is only half the size bush to what we have grown before.

Sept 15 : Bit late now but the Rocoto Yellow has a few fruits developing, also the paper lantern is doing well with a few looking like ripening soon.

Sept 25 : Damp and cold mornings and whitefly now becoming a problem with black sooty leaves meant picking a lot of fruit and leaving the healthier plants with plenty of space around. A few pot plants, Paper Lantern and the Rocoto Yellow remain. 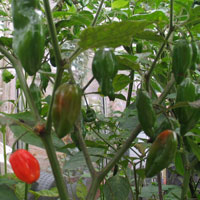 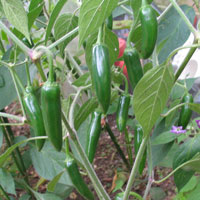 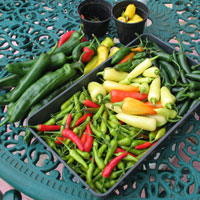 Time for a pick

Oct 5 : Remaining plants are the Paper Lantern which has a nice crop of ripening fruit on, the Salsa, which is in a pot, may pick these and try and overwinter this sturdy little plant, and the Rocoto Yellow, a few large fruits still going, will have to wait and see on this one. The Naga which is in a pot, has a few very small fruits on but looks too far behind to come to anything, also just found the lemon drop with a couple of yellow fruits on but has a big problem with sooty leaves again.

Nov 5 : Still hoping the Rocoto Yellow may ripen, if not will harvest them all soon. Paper Lantern still looks in good condition in its pot, so will bring him indoors now and keep overwinter for an earlier crop next year.