This year we still haven't advanced to any new growing techniques and rely on a sand hot bed and planting in pots with soil, still not many hot varieties on the scene yet and most of the seeds were obtained from America as availability in the UK is still pretty poor.

All plants were grown straight in the ground or pots, so no significant equipment was used this year, apart from some tomato food when the fruits were setting and growing.

This year we build a sand bed with a heated coil underneath to hold one of the trays on the left. Each tray has 300 cells so hopefully we should get a few up, most were showing within a week, but 2 varieties, Decorator and Tampico Fiesta never appeared, which were new seeds this year. The heat was gradually taken away so the plants didn't get too tall and spindly and now they are now a month old and are in pots outside now in an unheated greenhouse. All of the plants are potted on in, also quantities of ornamental kitchen windowsill plants have been grown for sale on our market stallthis year, Tri Colour Variegated, Pretty Purple, Prairie Fire, Candlelight, Holiday Cheer plus few greenhouse types like Jalapeno, Bulgarian Carrot with a few spares of the above list.

May 20: Apart from the 2 which didn't germinate at all, the rest are now doing well, with the Criolla, Czech Black, Early Jalapeno, Giant Jalapeno and Rocoto planted straight into the ground in the greenhouse. Tabasco, Lipstick and Thai Sun will go into the ground when space is available while the others will be grown on in pots. The labelling as shown left, has worked better than previous years as they aren't getting muddled up or the names washed off with watering with the higher sticks.

May 20: All plants are now doing well watered daily with a weak feed every 2 weeks. Czech Black is the earliest with 2 inch black chillis on, most of the other plants now have chillis except Tabasco which is only just showing signs of its first flower, Thai Sun which is a very slow grower, big leaves but no flowers and the Rocoto which is just about to form its first fruit. The ground plants are now all about 3 foot high and supported with strings while most of the plants in pots are about 1 foot. The Rooster Spur is a very attractive small leafed bush which is absolutely covered in 1 cm upright chillis. The Early Jalapeno does not seem to be any earlier than growing a standard variety, although it has good sized fruit on it certainly isn't prolific, which I was expecting from an early strain for the UK climate. 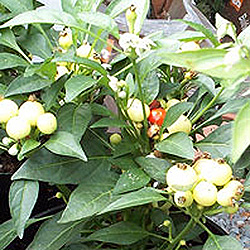 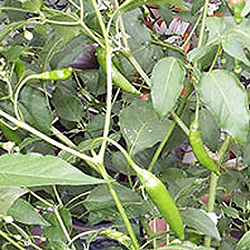 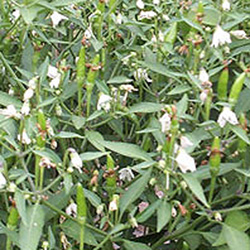 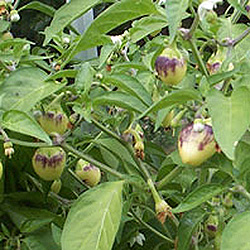 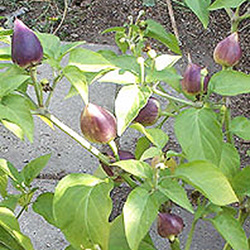 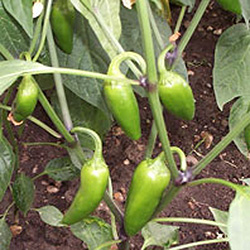 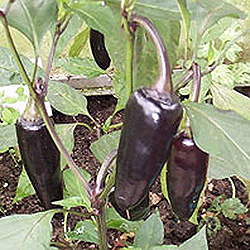 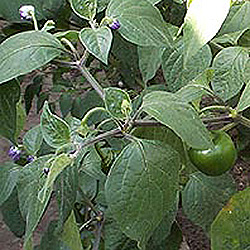 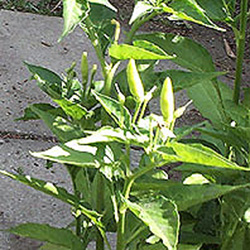 Aug16 : All plants have chillis on except the Thai Sun which is about 2 foot high, big leaves and only just started to flower. The Rocoto is about 4 foot high covered in purple flowers and up to 2cm roundish green chillis. Czech Black is very similar chilli to Jalapeno but it is jet black ripening with some of them ripening to deep red. The giant Jalapeno's are about twice size as the normal Jalapeno's and will shortly be picked for the BBQ.

Aug 23 : The Tabasco has little yellow 2cm uprights on and the Rooster spur has even smaller 1cm uprights on which are now turning from green to red. The Criolla Sella has turned into a large sprawling bush with masses of 7 - 8 cm green chillis on which are now turning to a bright orange. The Lipstick are about 14cm long and are about to ripen. With this hot weather all plants are being kept damp with up to 2 waters a day and some have had a weak tomato feed.

Sept 21 : Thai Sun is just coming into flower, (about 400cm high) from a march sowing how long a season does this need? one to avoid in the future. All the others are ripening on the plant, the Criolla Sella is full of orange chillis, the Early Jalapeno, Giant Jalapeno and Czech Black are being picked before they all ripen to a deep red and being eaten. The pot plants are probably suffering a bit this year due to the long spells of hot weather which is unlike the UK! and hence may have ended up a bit too dry, but the Rooster spur is full of little hot tapered chillis and looks a very attractive plant. 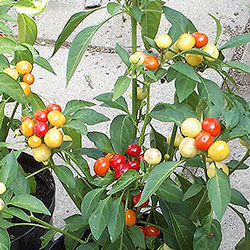 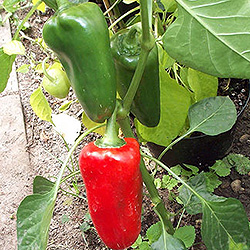 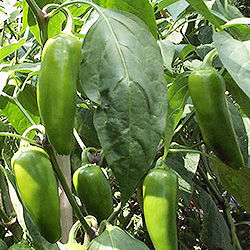 Sept 29 : Jimmy Little has ripened to deep orange and the Tennessee Teardrop ripened to a bright red but have now all been picked as both were in pots. The later developers, the Tabasco has 2cm tapered pale green chillis on and the Rocoto is going mad growing everywhere full of 6cm apple shaped chillis which are still green

October 12 : It shows what a long growing season is needed for many chilli plants in the UK, especially if they don't get off to a good start in the spring. Although a lot of the plants are laden with fruit they need to ripen before next month when it really is the end of the growing season as the damp and cold will start to perish the plants.

Oct 23: Thai Sun (left, photo taken today) it has grown to about 1 metre high but has hardly flowered and now is probably too cold, a whole season for just a few flowers! Most of the others are now all picked with some chillis being frozen and others dried and some of the seeds bagged up and labelled. The Rocoto still has plenty of large fruit on and is now ripening well and the Criolla Sella's still producing masses of orange fruit but the others will now be dug up and cleaned out as its getting too cold overnight and we have now had a morning frost.

Still another successful year apart from the Thai Sun.